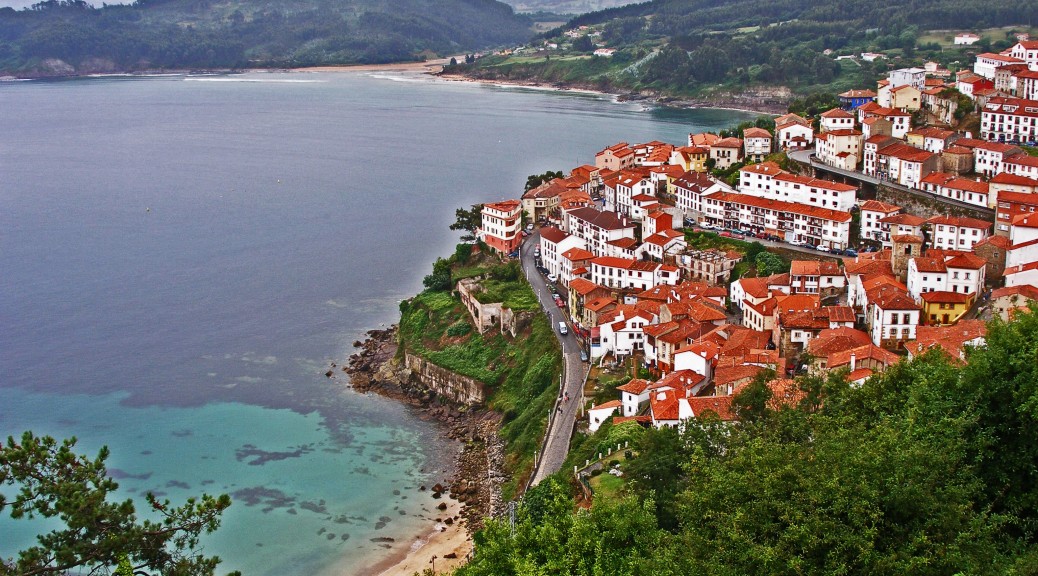 Asturias is a treasure, situated to the north of the Iberian peninsula, made up of numerous gems such as its scenery, its art, its history and traditions, its gastronomy and its people. Asturias´ natural beauty surprises, attracts and ensnares. Should we seek a colour to define it, this would be the green of its valleys, with their meadows, mountains and abundant forests. A colour that on sunny spring and summer days takes on an intense shine, and which in autumn is transformed into a melancholic mixture of reds, ochres and browns that both fascinates and impresses.

Another gift to the eyes is its coastline peppered with beaches; some sweeping and exposed, others small and more secluded. A postcard that no one should miss.

Asturias is a magnificient open-air museum with outstanding, diverse scenery in a territory that is always close at hand, a mix of sea and mountains, in which travellers will come across coastal ranges and fantastic valleys through which the short yet mighty Astur rivers sprightly flow.

The plant and animal worlds are also extremely varied, with copious forests of beach, oak and chestnut, inhabited by quasi-mythical animals that are extremely difficult to catch a glimpse of, such as the capercaillie, the brown bear or the chamois, which accompany the wolf, the wild boar and the deer.

Natural beauty deserves recognition, and accordingly almost a third of the region has been declared a Protected Nature Area (Biosphere Reserves, National park, Nature Parks…). However, all this nature is not only to be enjoyed by contemplating it, but also allows a host of activities to be carried out that cater for all tastes and conditions: hiking, cycling, pony trekking, canoeing down rivers, rock climbing, hunting and fishing, skiing, surfing, and all of those open-air activities that respect for nature allows.

This small an ancient kingdom of Asturias conserves a culture and traditions spanning millenniums. The region boasts a splendid history: Palaeolithic remains (the caves of Tito Bustillo, Candamo, El Pindal, El Buxu…), pre-Roman hillfort culture (with hundreds of documented fillforts), Roman remains, churches, manor houses and palaces that cover all ertistic periods, from Romanesque to the most contemporary art, not to forget of course Asturian Art, which is unique and listed as Heritage of Mankind. Art lovers may round off their tour of Asturias by visiting its museums, where they will discover fabolous local painters through which to better acquaint themselves with the past and ways of life of the Asturian people. However, all this spectacle of history and scenery that is Asturias would not be complete without all its “handsome” seafaring or mountain folk and villages; or its cities, which still conserve the charm of a medieval past.

The region may also boast of its gastronomy. The sea, fields and mountains offer up everything that one could wish for, and not only for traditional cuisine. Nowadays, new dishes are prepared that, alongside time-honoured cooking, make this place not only a natural paradise, but also a paradise of fine eating: Fabada and pote stews, seafood (crab and goose barnacles), fish (hake, anglerfish…), roxa beef, lamb, and of course a great variety of cheeses (Cabrales, Casín, Oscos…). For those with a sweet tooth, deserts such as rice pudding, walnut or hazelnut pastries, pancakes… All washed down with cider, the Asturian drink par excellence, and a full belly is guaranteed.

This land of traditions is also rich in ethnography and folklore: hórreos, quintanas, casonas de Indianos, old chapels, handicrafts, ancestral traditions, languaje, music and dances that come down to us from the remotest past…and romerías, which favour the magic of the night, just like its mythological beings, such as pucks or wood nymphs.

The west of Asturias is an extensive maritime facade formed by sweeping beaches, rocky coves and cliffs, from which endless green valleys advance deeply inland. Villages full of stony authenticity emerge there from the earth itself, as well as the fishing villages on the banks of the River Eo, with their white and slate grey countenance, adapting to the lay of the land as they climb the hillsides and hang over the sea.

This is a land of forests and surprising scenery that is rich in history and which presents itself to visitors resplendent with mists, dolmens, hillforts and ancestral traditions. It boasts an specially interesting artistic heritage an stunning scenery full of silence, peace, tranquillity and grandeur. There exists here a profound respect for nature; with which men, animals and -according to the legends- disquieting mythological creatures have coexisted sinde time immemorial.

Visit the brañas vaqueiras or mountains hamlets of itinerant herdsmen, the hillforts of San Chuis, Chao San Martín (under excavation) and Coaña, the Roman gold mines of Besuyo or Naviego, Corias Monastery, the World Biosphere Reserve of Muniellos Forest and the Sources of the river Narcea, Degaña and Ibias, the remarkable Folk Museum of Grandas de Salime, Barayo Nature Reserve, which is like a journey into the past on account of its wild, natural state, the ethnographic sites of Os Teixois, Mazonovo and Esquíos (in the borough of Taramundi), the magical territory of Los Oscos (the boroughs of Villanueva, San Martín and Santa Eulalia), the Roman mines of Campos and Salave, Luarca cemetery, the protected landscape between Capes Vidío and Busto, Selgas Palace and its grounds… and so on, an endless list of small villages and magnificent scenery to see and enjoy. The West is the still-to-be-discovered magnificent treasury of nature, ethnography and traditions of Asturias.

In the outstanding coastal scenery, awe-inspiring cliffs, islets and beaches alternate with small fishing harbours like that of Candás and large commercial ports like those of Avilés and Gijón. Valleys and meadows follow on from one another, dotted with small villages and farmhouses, surrounded by the most important towns and cities of Asturias. To the south lies the mountain pass of Pajares, a milenary link with the plateau. But there are also the mining valleys of the Rivers Caudal and Nalón, and Somiedo Nature Park. All this in the narrow strip that goes from the see to the mountains. Central Asturias is a treasure trove of numerous prehistoric sites (such as the cave at Candamo), the pre-Romanesque art, declared Heritage of Mankind, and the Middle Ages via the historical quarters of Oviedo, Gijón and Avilés. Palaces, churches, industrial remains and cities brimming with art and culture. The central area is the domain par excellence of cider, the beverage of Asturias, which must be enjoyed in the atmosphere of its traditional chigres.

The historical quarters of Oviedo, Gijón, with its venerable fishing quarters of Cimadevilla, and Avilés. Noega Hillfort and the Roman baths in Gijón. Pre-Romanesque monuments, from Santa Cristina de Lena to Valdediós, passing through all the pre-Romanesque gems of Oviedo, its Cathedral and Sacred Chamber. Museums (diocesan, art galleries, archaelogical, folk, clog, dairy, the Water House, the Armando Palacio Valdés House-Museum, Mining and many more). Fishing ports and Gijón marina. The Protected Landscape of Cabo Peñas. The Aramo Range. Asturian mountains villages. The collection of hórreos in Cenera, Bueño, Gallegos and Insierto. Indigenous flora and fauna in Somiedo Nature Park, and innumerable natural resources in their pure state (forests, rivers, alpine valleys) to which must be added all the cultural ativities that cities like Oviedo and Gijón offer the whole year through: theatre, an opera season, zarzuela, concerts…

Eastern Asturias is a land of great contrasts that is characterised by the diversity of its scenery: the inland area of alpine mountains with their forests and valleys through which excellent salmon and trout fishing rivers flow down to the coastal strip dotted with a succesion of smooth beaches of fine sand and crystalline waters and tormented cliffs that spout sea-water through their famous bufones (blowholes). Coatal ranges, such as those of El Cuera and El Sueve, which appear like scenic vantage points overlooking the sea over which the legendary Asturcón pony runs free. Behind these arise the majestic Picos de Europa. Traces of the remotest past of humanity are present in the caves of Tito Bustillo, El Pindal or La Covaciella, although the most ancient are the ichnites or fossilised footprints of dinosaurs that can be seen along the coast from Villaviciosa to Ribadesella. All the villages of the East celebrate their patron saint´s day and keep their traditions very much alive: songs, dances, ramos (elaborated offerings of flowers and food), hogueras (similar to the maypole tradition) and the costumes bequeathed to them by their ancestors.

Eastern Asturias conserves all the riches of rural culture. The natural scenery is alive with small hamlets, with their houses and hórreos existing in perfectly harmony with the enviroment. A must on any visit to the coast are Tazones, Lastres, Ribadesella and Llanes. The Picos de Europa, the Sueve Massif, the magical River Cares, the secluded villages of Peñamellera, the Sanctuary of Covadonga, a spot suffused with mysticism and history, or Lakes Enol and Ercina are all essential destinations in the East of Asturias. Of interest also are the winding gorge of Los Beyos, the spectacular beech woods of Infiesto and scenic vantage points like those of El Fitu or Ballota. The valleys of the River Piloña, Ponga Range, the blowholes of Pría and Vidiago, or Villaviciosa Estuary are more tahn a sample of the natural riches of the area. There are numerous museums (the Eastern Folk Museum in Porrúa, the Jurassic Museum, the Cider Museum), the mysterious Peña tú stone idol, churches, palaces, manor houses, casonas, houses built by Indianos, and, of course, Pre-Romanesque art, the best example of which is Valdediós.

Texts of above are extracted from a book made by Casonas Asturianas. I strongly recommend this association of charming hotels in Asturias. http://www.casonasasturianas.com/

Asturias and all north of Spain is sometimes an overlooked part of our country, it is very different from other areas like the famous Barcelona or Andalucia region so probably you must visit Spain again!