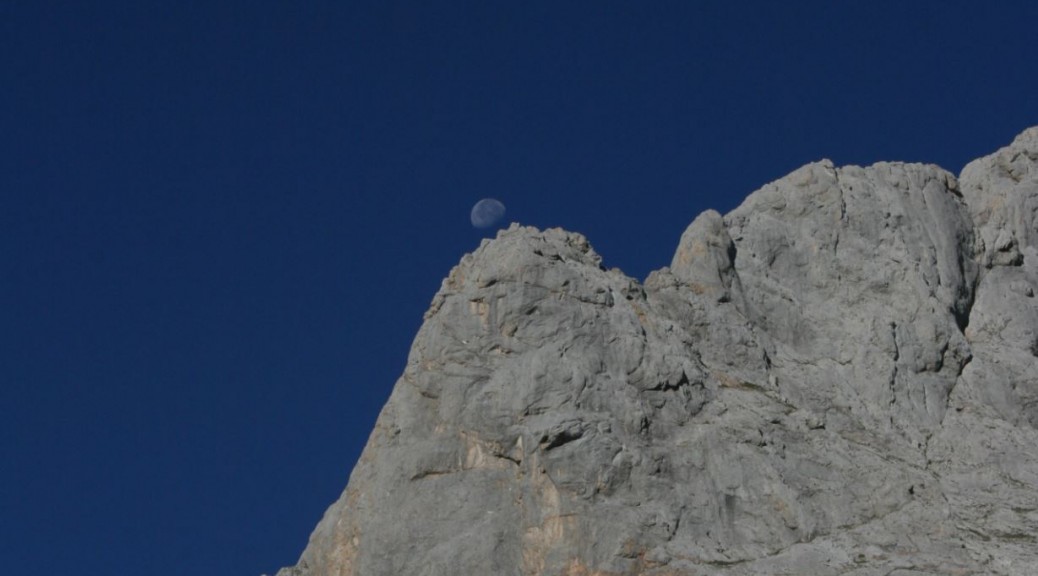 The Picos de Europa mountains extend to the north of the Cantabrian mountain range with an approximate surface of 500 km2, and its dimensions are more or less, 35 km east to west and, 15 km north to south.

On the 22nd of July 1918, Don Pedro Pidal, marquis of Villaviciosa, managed to give free way to the first of the Spanish laws which appeared on National Parks, approving therefore the National Park “Montaña de Covadonga”; first National Park in Spain, with a surface area of 16,925 hectares. More than seventy years had to pass so that a new law, enlarging the National Park established limits, was approved by Parliament. On the 30th of May of 1995 the National Park of “Picos de Europa” was declared; embracing an extension of 64,660 hectares, converting it not only in the largest National Park Spain, but also in Europe.
The Picos de Europa mountains were originated by the sedimentation of submarine limestones 3,000 metres thick, during the Carboniferous Period of the Primary Era, comprising from 345 million years ago up to 280 million years ago. The slates, sandstones and conglomerates, all form the valley material surrounding them. 220 million years ago, in the Hercinian folding, the first mountainous relief arised, producing an elevated horst between the depressions of Liébana and Cares, to rise definitively in the alpine folding of the tertiary Era, 65 million years ago.
The Pyrenees and the Alps were also formed this way, compressing the calcareous mass south to north, in the sea direction. Then, the limestone masses deeply fractured with such folding, and upon rising, this fragmentation formed three big blocks with enormous cracks affecting the whole group south to north, and getting wider due to the glacial erosion. Later these blocks would suffer a great fluvial type erosion, slowly developing into the majestic shape of the mountain gorges known today, communicating the valleys with the sea. Four big gorges stand out, consequence of all this great process originated along centuries in the mountainous group of Picos de Europa: The gorge of “Los Beyos”, out of the river Sella; the Cares gorge, well-known as the “Divine Throat”, furrowed by the river Cares and most visited by mountaineers and tourists; the Valley of Aliva and the gorge of “La India”, where the river Duje flows; and, finally, the famous gorge of “La Hermida”, furrowed by the river Deva, which sprouts in Fuente Dé, on the foot of the rocky circus contemplating the cable car of Fuente Dé. The Cares and Duje rivers unite near Puente Poncebos and later the Deva river will join them in Panes, finally ending in the ria of Tina Mayor in Unquera.
The current relief contemplated today in Picos de Europa is a result of all the folding, the glaciers´ action during the Quaternary period and the presence of karst formations (limestone dissolution landscape). The glacier remains (highland lakes, moraines, “llambrías”, etc.) are not as abundant as in other mountainous formations due to the break-up of limestone. This is because the glacier origin lakes tend to form chasms as water infiltrates through the limestone cracks; one could also talk about the “jous”, another peculiar characteristic in Picos de Europa; these are contiguous series of close depressions, almost circular in shape, which can reach 2 km diameter, and separated by big heights. In the “jous” the rain and melting snow can only escape through underground drains.
The folding fractures and posterior action of underground water have created multitude wells and galleries, a paradise for those people who enjoy practising potholing. They consider Picos de Europa as mountaineers consider the Himalaya, having explored chasms already more than 1,000 metres altitude gap, very close to the world record in this speciality.
Many of these underground cracks were filled up in past geological periods with mineral defiles, mainly deriving from zinc, calamine and sphalerite (the gem variety of this last one is well known among mineral and gem collectors), as well as lead and manganese.
All these factors started a flourishing mining activity during the last century that continued until some years ago when the mines in Aliva closed.
The valleys, with their characteristic U shape, are witnesses of past glaciers; the “jous”, the “llambrías”, and the polished and grooved rocks on the surface. The karst formations have their origin in the dissolution of limestone through rainfall, due to their light acidity. Limestone is quite impermeable and water can only enter through the cracks, accumulating in underground rivers, lakes and other formations inside caves and underground galleries. The underground water emerges in fountains at the foot of the mountains; then the karstic formations of limestone dissolution absorb the water and originate the chasms, “jous”, cracks, caves and galleries making up the group of Picos de Europa, unique for the practice of sports like potholing, canyon descent and, especially, the most extended practice; rock climbing up to the famous peaks (part, not only of our history, but also of some tragic moments in this marvellous mountains), like the “Naranjo de Bulnes”, also called “Pico Urriello”.
The quaternary glaciations, like those of Würm, caused that the Picos de Europa mass was one of the most important points of glacier formations in the whole of the Peninsula, covered by an ice cap reaching the 1,000 metres altitude. This way, the glaciers of Lloroza, Deva, Bulnes, etc., were formed; later leaving their print marked in the mountains.
In Picos de Europa the relief is very uneven, with big altitude differences and peaks widely surpassing 2,000 metres, like Torre Cerredo (2,648 metres) or Peña Santa de Castilla (2,596 metres). The mountainous group extends over the territory belonging to three Autonomous Communities: Cantabria, Principado de Asturias and Castilla y León, and it is divided in three massifs, whose limits are determined by the rivers: Deva, Duje, Cares and Sella. Ten are the municipalities contributing territory to the National Park.
In Cantabria: Tresviso, Cillorigo and Camaleño.
The Principado de Asturias: Peñamellera Baja, Cabrales, Amieva, Onís and Cangas of Onís.
In Castilla y León: Posada de Valdeón and Oseja de Sajambre.
As we have said previously, Picos de Europa form three important well-known massifs: Macizo Oriental (eastern massif), also called “Andara”, Macizo Central (central massif), or “Urrieles”, and Macizo Occidental (western massif), or Cornión.

Due to the proximity of Picos de Europa to the sea; little more than 20 km, and because they are north of the Cantabrian mountain range, as well as their altitude above sea level, all condition the humid air masses affecting the area. When these get to the coast, they lift cloud fronts with the following condensation, which provokes frequent rainfalls.

A weather characterised by a high humidity and little light, conditions the weather peculiarities of Picos de Europa. Both, the North and Western winds are the most dominant in the area, as well as the ones causing the presence of clouds and snow on the mountain massifs. The NW ones are those which clean back the atmosphere.
The presence of snow is specially accentuated over the winter months, specially from December, but snow patches are not rare at all, staying permanent in many places of Picos de Europa. Avalanches are also frequent in those areas where the slopes are steeper, so it is dangerous to walk in the mountains under those slopes with a combination of thick snow and sun exposure; one of those routes is the one between “La Vueltona” and “Horcados Rojos”, in the Central Massif.

Within such special weather conditions area, it is frequent to see the popular and frightful mist, making sight difficult and disorienting tourists and mountaineers, with the added danger of being in a rugged relief area. But many times this is compensated by a dense mist developing over the valley when we are at a summit and it seems as if we have an immense cloud sea at our feet. This is for sure one of the most intense contemplation moments for a mountaineer in Picos de Europa.

2 thoughts on “An Approach to: Picos de Europa, one of the most beautiful national parks in Europe”